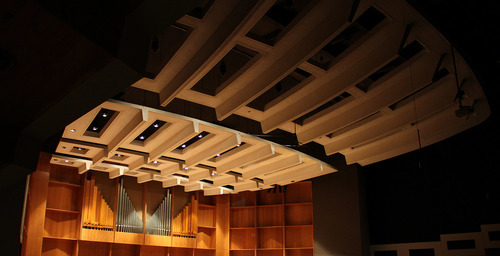 Built in the mid 1970’s as part of the university’s expansion, the Concert Hall is the jewel of the Fine Arts Complex which included new facilities for the Art, Music, and Theatre Departments of the University of Alaska, Fairbanks. It has a capacity of over 900 seats and is considered by many to be the best acoustical venue in the state of Alaska for non amplified concerts. Since its opening, it has been the resident home of the Fairbanks Symphony Orchestra and the Arctic Chamber Orchestra as well as the home venue for many concerts and recitals produced by the University of Alaska Music Department. It is also host to many visiting lecturers, artists and performers from around the world. Recently, the Hall has been upgraded with handicapped access and seating. On November 4th, 1984, the Fine Arts Concert Hall was renamed the Charles W. Davis Concert Hall. The dedicatory plaque outside the center Box Office reads:

The Davis Concert Hall houses a pipe organ built for the University of Alaska Fairbanks by the Gress-Miles Organ Company of Princeton, New Jersey. Installed between June 1982 and June 1983, the organ was designed by G. Edgar Gress, Vice President and Tonal Director of the Gress-Miles Company, in consultation with Dr. David Stech of the UAF Music Department. The organ is controlled from a three-manual draw-knob type console constructed of American Walnut with Brazilian Mahogany surrounding the keyboard and stop jamb area. The console controls the valve mechanisms by use of electro-mechanical action with solid state switching. Low wind pressure and classic voicing is used throughout, with a few ranks designed in nineteenth century style. The instrument consists of forty-four ranks (rows of pipes), sixty-six stops and 2471 pipes. The inaugural performance with orchestra occurred on October 23, 1983. The featured work was the Saint-Saens Symphony No.3 in C Minor with the Fairbanks Symphony Orchestra conducted by Gordon Wright and Dave Stech at the console.