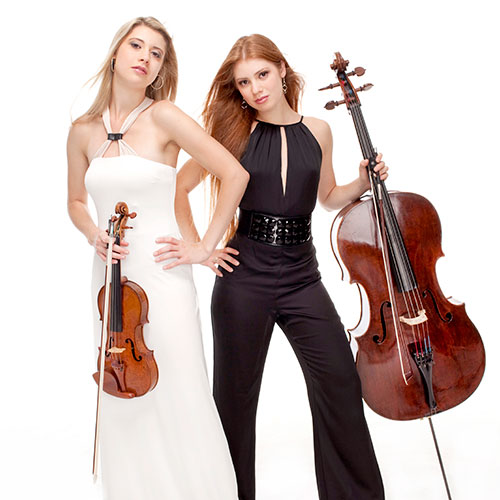 duo parnas is the stunning collaboration of supremely musical sisters, violinist Madalyn Parnas and cellist Cicely Parnas. Their profound artistry speaks of their life-long partnership and performance career. Officially recognized in Carnegie Hall with a 1st prize win at the 2008 International Chamber Music Ensemble Competition, the duo soon earned rave reviews in The New York Times for their exciting and technically flawless performances. “… the duo parnas gave a stunning account of Martinu’s lively, sometimes prickly Duo for Violin and Cello. The intricate give-and-take between the cello and violin lines was perfectly balanced and suffused with … electricity and drama …” Another review stated, “The duo parnas gave … an electrifying reading, couching it in a lush tone and executing its complex interplay with pinpoint precision.” The duo parnas has performed across the globe in music festivals, recitals,and as soloists with orchestra. They have performed with Peter Serkin as the Parnas/Serkin Trio and have earned international acclaim for their recordings.

Upcoming in the 2014-2015 season, the duo parnasperforms the Brahms Double Concerto with the Alexandria Symphony Orchestra, and debuts Rozsa’s Sinfonia Concertante with the Schenectady Symphony Orchestra. While on tour in Asia, the duo performs at the Shanghai and Musical Arts Festival and Macao International Music Festival, as well as the Honest Brook Musical Festival and Maverick Concerts in the US. This season the duo presents recitals in California, Ohio, Indiana, Minnesota and New York. The duo parnas has performed in festivals including Tannery Pond, Tanglewood, ShortGrass, Music Mountain, American Composers and Composers Now! Festivals in the US; the Banff and Lachine Music Festivals and Bravo! Music Series in Canada; and the ProQuartet Festival in France.

Last year the duo parnas toured as guest soloists with the French Orchestre National des Pays de la Loire, performing works by Saint-Saëns. In a six-concert tour of the Loire Valley, Madalyn performed the Violin Concerto No. 3, Cicely his Cello Concerto in A Minor, and together the beautiful double concerto, La Muse et Le Poète. They performed numerous times as artists-in-residence at the 2013 El Paso Pro-Musica Festival, including performances as soloists with the El Paso Symphony Orchestra and in many chamber music concerts. Previous appearances as duo soloists with orchestra include the New York String Alumni Orchestra under the baton of Jaime Laredo, the Hudson Valley Philharmonic conducted by Randall Fleisher, and the Albany Symphony Orchestra led by David Alan Miller, among many others.

Recording for Sheffield Lab, the duo parnas has released three CDs: Parnas Double (2008), Gare du Nord (2010), and duo parnas NOW (2014). This most recent album is so named to emphasize that only works by living composers are included, allowing for the exciting collaborative process between composer and artists. This amazing collection of duos includes pieces by award-winning composers Lera Auerbach, William Bolcom, Paul Moravec, and Charles Wuorinen. Mr. Moravec’s work is entitled Parnas Duo, a string duo he named for and dedicated to duo parnas. On The Other Side of Time (Albany Records, 2012), the duo perfoms Brian Fennelly’s double Concerto, Fantasia Concertante. The duo also recorded this award-winning concerto with the Fauxharmonic Orchestra, an ensemble of digital instruments “conducted” by Paul Henry Smith.

Madalyn and Cicely hold Artist Diplomas from the Indiana University Jacobs School of Music, where they studied with Jaime Laredo and Sharon Robinson. Madalyn holds a B.S. in Music Industry and French, and a M.A. from London’s Royal Academy of Music, where she studied as a 2012 Marshall Scholar. She performs on a 1715 Allessandro Gagliano violin, and Cicely on a 1712 Giovanni Grancino cello. They are the granddaughters of the legendary cellist Leslie Parnas.